Home > Linux > How to Use the Awk Command in Linux

How to Use the Awk Command in Linux

by Nilam Shaw
in How To, Linux
Reading Time: 4 mins read
0 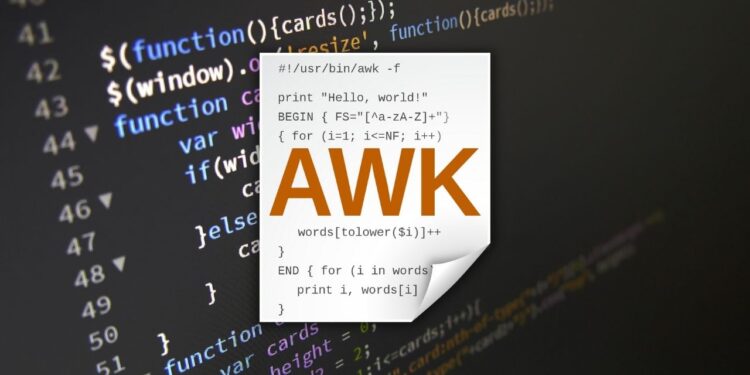 AWK is a scripting language that analyzes text fields. It is widely used for processing data files containing lines and columns. AWK was first introduced in the 1970s. It has given the name based on the surnames of its developers: Alfred Aho, Peter Weinberger, and Brian Kernighan.

The basic format of AWK command is awk ‘pattern {action}’ input-file > output-file. Here actually, if the pattern is present in a line of the input file, awk will apply the action to the line and will write the resulting line to the output file.

How to Use the Awk Command in Linux

The awk command is present by default in modern Linux systems. So, no need to install it. Here we have discussed some points on how to use the awk command in Linux. So, here we go:

To print a specific column one should use the command. For example, if you want to print 2nd and 3rd, use the following command:

In any case, if you want to print all the lines and columns in a file simply use the following command:

One can use the above syntax for printing lines with a specific pattern. For example, if you want to print lines having the letter ‘o’ you have to add simply add ‘o’ in place of “variable to be matched”.

This command will print the 3rd and 4th columns that have the ‘a’ letter.

For a better analysis of data, awk comes with several variables. Here, we described only a few of them.

NR: NR commands keep the current counts of the number of input records. To count the number of the input file, one can use the command:

NF: The NF variable keeps the count of fields for each record.

ORS: ORS stands for output record separator. It separates every line of the input file desirably.

OFS: OFS stands for output field separator. It separates every field in the desired output format.

If the table contains numbers, the awk command can be used to perform arithmetic operations.

To save the output results, one can use the redirection operator “>”. Moreover, you can verify the result using the cat command.

Awk command in Linux helps the programmer to write a useful program. Here we have discussed only a few commands. Hope you have liked the article and found it useful. If you have any suggestions, then leave them in the comment section below.

I am a passionate writer, I am interested in learning new facts about technology, computer, and love to read about them.

How to Change Desktop Wallpaper in Ubuntu

How to Change Screen Resolution in Ubuntu